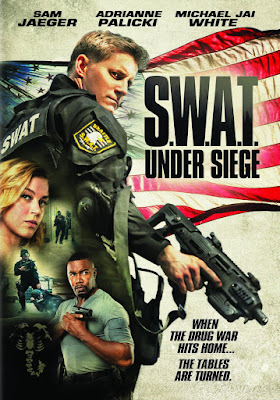 “When a DEA and SWAT cartel takedown ends in a shootout, SWAT agent Travis Hall (Sam Jaeger) seizes a mysterious prisoner taking him into custody.
Before long, the SWAT compound is under siege by wave after wave of assault teams attempting to recover the prisoner known only as ‘The Scorpion’
for the tattoo blazed across his back. When Travis discovers that his prisoner is a Secret Ops double agent planted within the cartel,
it’s up to him and his expert SWAT team (Adrianne Palicki, Michael White) to keep ‘The Scorpion’ and his billion dollar secrets safe.”!!!